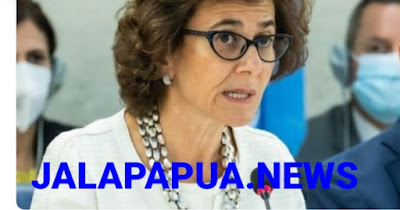 Nada Al-Nashif, acting UN High Commissioner for Human Rights – Doc. OHCHR
Jayapura, JALAPAPUA.NEWS– The killing and mutilation of a number of members of the TNI and civilians in Timika some time ago invited the reaction of the United Nations (UN). Nada Al-Nashif, acting UN High Commissioner for Human Rights before the UN Human Rights Council session, Monday (12/9/2022) said that he received reports of intensifying violence in the provinces of Papua and West Papua.
“In the Papua region (Papua and West Papua Provinces) in Indonesia, we received reports of intensifying violence, including clashes between Indonesian security forces and armed groups that resulted in an unknown number of civilian casualties and casualties andinternal refugees,” Nada said in her general statement at the opening of the 51st session of the UN Human Rights Council Session.
Nada also said she had received recent reports of murders and mutilations that took place in Timika, Papua.
“I am appalled by recent reports of the remains of four indigenous Papuan civilians found outside Timika in West Papua Province on 22 August,”
Nada noted the Government’s initial efforts to investigate, including the arrest of at least six military personnel. However, he hopes this effort will be followed up with a thorough, impartial and independent investigation.
“Those responsible must be held to account,” Nada said.
Arnold Lokbere, Rian Nirigi, Elemaniel Nirigi and Atis Tini have been missing since August 22, 2022. Four days later, the people of Kampung Tipagu, in Timika found Arnold Lokbere’s body in the river around the village of Tipagu. The body of the deceased was found headless and without legs. The day after Arnold Lokbere’s body was found, Pale and the other victims’ families found Elemaniel Nirigi’s body near the location where Arnold Nirigi’s body was found. Elemaniel was also found without a head and legs.
The perpetrators of this murder and mutilation were later identified as six members of the TNI and four civilians. They are APL aka Jeck, DU, R, and RMH. Meanwhile, TNI AD personnel serve in Brigif 20/Kostrad, namely Major Hf, Captain Dk, Praka Pr, Private Ras, Private Pc, and Private R. (*)
Source : Jubi
Editor  : M  Gobai